[My article, reprinted from Jeju Weekly]

A look at the cultural practices of the Chuseok season

As Chuseok approaches, so does the celebration of harvest.

Often called “Korea’s Thanksgiving,” we would do well to recall that “thanksgiving” in cultures around the world is a harvest festival of agrarian subsistence.

In Jeju’s traditional agriculturally-based society, life centered around the concept of harvest – rituals to entreat the gods for bounty and related myths, communal labor practices and collective economics, unique farming methods to compensate for a harsh environment and the songs which accompanied these tasks.

Harvest comes in many forms: from the planted and tilled farmland to the wild herbs, nuts, and berries to be gathered, to the sea and its watery field. The villages of Jeju have always relied heavily on harvest, whether seaside or inland. Traditional holidays are therefore primarily based on agrarian cycles.

In winter, Jeongwol Daeboreum – the fire festival – burns the fields of vermin in preparation for planting and livestock grazing to come. Ipchun heralds the coming spring and is considered a harvest festival as its ritual entreats the gods for their beneficence.

So too is the Yeongdeung-gut, a ritual designated by UNESCO as a World Cultural Heritage, as the goddess of wind and earth visits the island for two weeks, scattering her seed in the waters as well as on land. An observance by fishermen and diving women alike, it sits in contrast to the Jamsu-gut, a ritual solely for the diving women as they begin their new season of harvesting marine products from the sea. 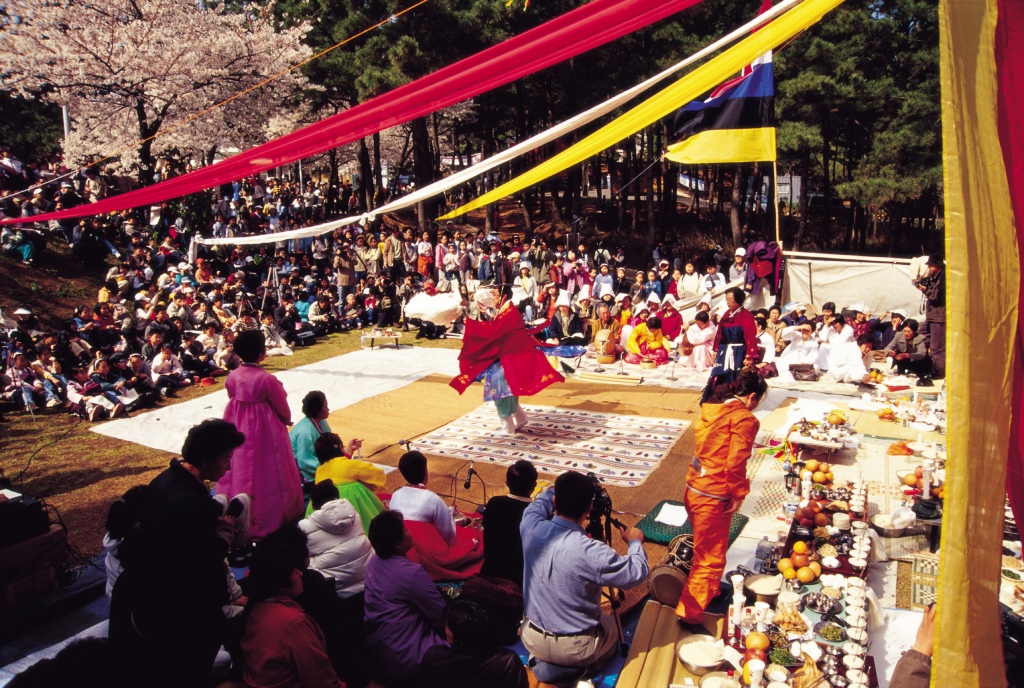 The end of summer is marked by Ipchun, and Chuseok celebrates the harvest bounty.

In addition to the agrarian goddess Yeongdeung, Jacheonbi and Gopang Halmang are also Jeju goddesses of the earth, presiding over agricultural practice and entreated for bountiful harvest.

The people of Jeju had to cope with a stony topography and windy climate, both challenging to agrarian practice. They developed methods like building low stone fences around the fields and tamping of the topsoil over seed by human feet and horse hooves. In harvesting sea product, similar stone fences were built to create tidal pools called “wondam” from which a daily catch, especially of anchovies, could be gathered.

These labor practices, as well as related ones like millstone grinding, were of necessity performed communally, contributing to the village structure and community bonds which define Jeju’s traditional society. In order to ease the burden of their work, Jeju people developed numerous labor songs.

These labor songs of Jeju are of two types: rhythmic ones meant to accompany repetitive work such as rowing, hoeing or threshing; and a more unique heterophonic style called “bang-ae sori,” in which a lead singer improvised a verse while the remainder responded in an often overlapping chorus.

Jeju people were known for their rhythm, one charming feature of which was a type of drumming on “heobeok,” the pottery jar used for carrying water. Women returning from the well would sit to rest and begin beating the jars in time, improvising not only their rhythm but accompanying song. 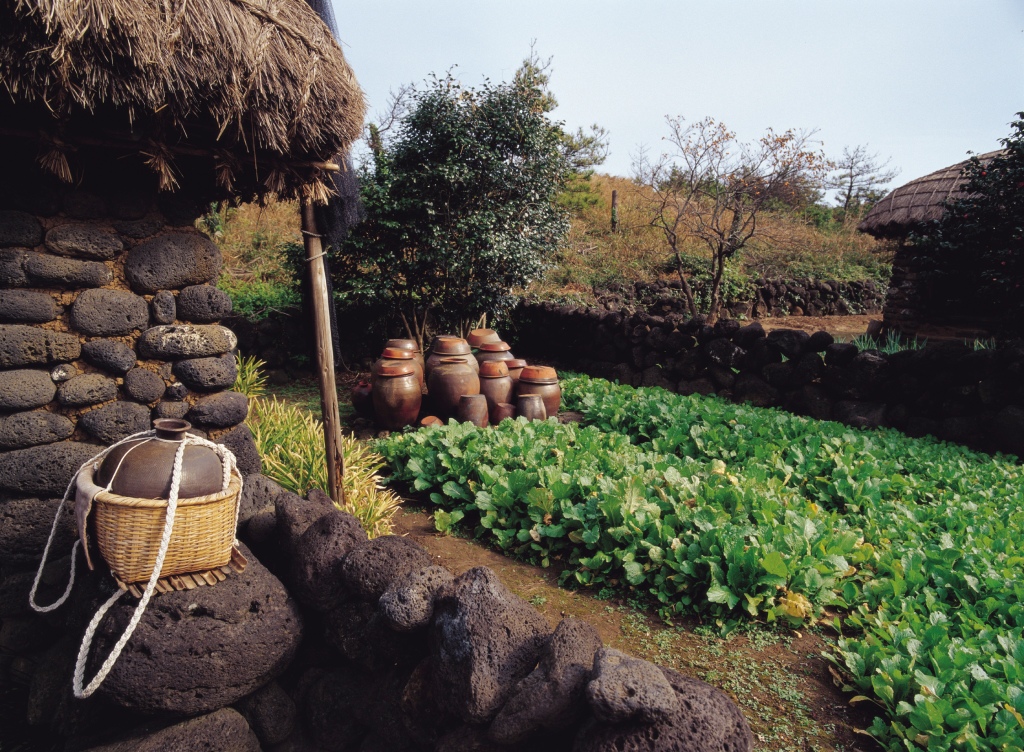 The Jeju government has a program whereby “Skills Holders” of traditional practices are officially designated as such. Yoon Kyung Noh, 91, is the only remaining skills holder of Gangjeong Village’s “Rice Harvest Song.” Kim Young Ja and Kang Deung Ja are skills holders of the “Song of the Haenyeo,” traditionally sung when rowing the boat to the diving location; they perform every Saturday at the Haenyeo Museum.

Examples of labor songs include “The Weeding Song” known as “odolttogi”or “dunggeuraedangsil,” thought to have first emerged in 1890 and sung to accompany the weeding by hand of the millet field, and the “Song of Stamping the Dry Field” or “batbapneunsori,” the aforementioned farming custom peculiar to Jeju.

For a people so accustomed to long days of heavy manual labor, the autumn harvest was surely welcomed.

Chuseok, a time to honor the ancestors by cleaning their graves and performing rituals of remembrance in which freshly harvested crops were offered on the altar, celebrates this time of bounty.