[My article, reprinted from Jeju Weekly]

Jeju, an Island of Villages

A look at village cultural life, then and now

Jeju City bears little resemblance to the village life of the island.

“Jeju-si,” seat of the island’s provincial government as well as the city’s mayoral offices, provides an urban environment of activity and opportunity, and houses the vast majority of the island’s population.

Similarities between life in the city and in the large number of villages scattered around the remainder of the land mass, however, is minimal at best.

Jeju’s culture is often proclaimed “unique” – that is, distinct from that of the mainland – but for those who largely spend their time in its capital city, that claim may seem false.

It is the village life, and the culture to be found there, that has historically defined Jeju. Over time, however, this village culture has been eroding.

Historically, each village largely maintained its own governance, a practice that remains in place today in the form of village councils, though their governing ability is minimal. Each village was self-sustaining, with agriculture and marine harvesting – fishing and diving – as mainstays.

Jeju is notorious for its harsh environment. The so-called “three abundances” – stone, wind, and women – were indicators of this hardship; both stone and wind presented grave challenges to agriculture, while the dangers of fishing in a typhoon-prone region caused many men to be lost at sea and women thus disproportionate in number.

The challenges of daily life required cooperation among village members, according to author and MBC producer Lee Jeong Heon and others, and labor was typically collective as a result. Cooperative economics, a trend in the modern global market, was the norm, and remnants can be found in the current eocheongye, or diving collectives, which are distinct to each village.

While no longer self-sustaining, the villages remain focused primarily on agriculture and marine industry, as well as on small business ownership and tourism.

Life in the village historically was strongly centered around shamanic practices, according to scholar Moon Moo Byung of Jeju Traditional Culture Institute, with several sacred sites of worship in each village and a majority of villagers as adherents. Each village had its own deities and myths. Holidays, agrarian markers, rites of passage and more were observed through communal ritual which assigned meaning to daily life.

As reported by scholar Kim Yu Jeong of Jeju Traditional Institute, villages were culturally distinct from one another as well. Life in a coastal village, where most people were located due to the nature of island life, was quite different from that of the inland or mountain villages, the latter now having disappeared.

One woman who grew up in an inland village of Chongsu and who now lives in Jeju City stated that she feels quite different from much of Jeju society, in that she has never seen the diving women in operation, known any fishermen, nor played by the shore or in the sea as a child. 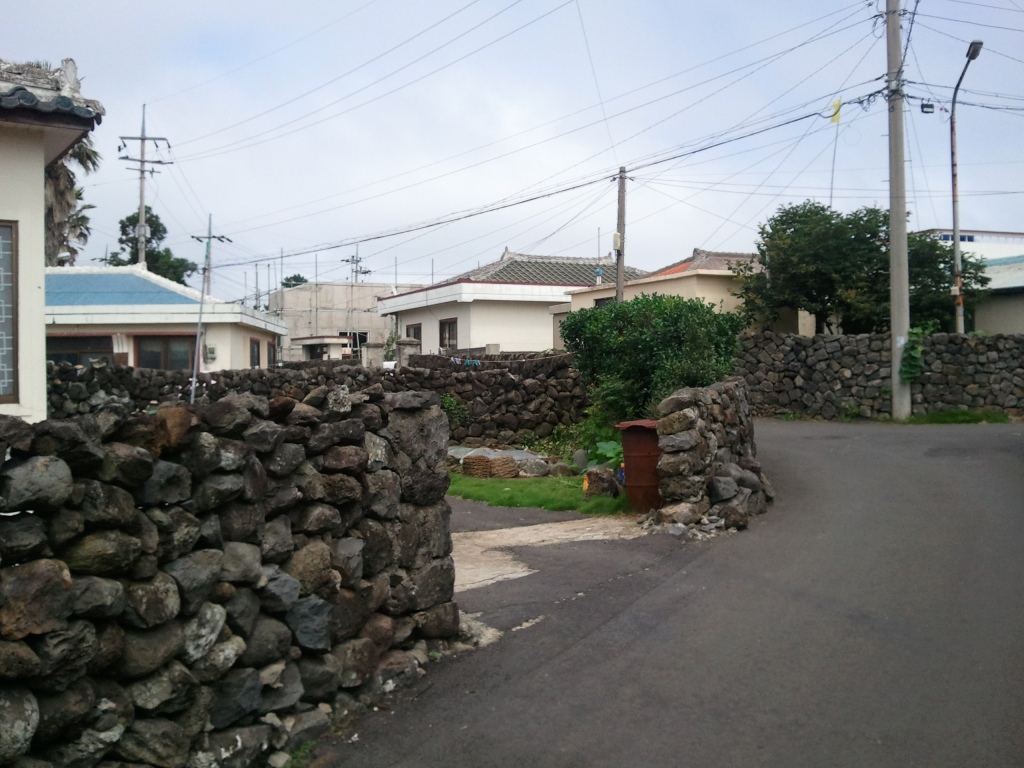 Notable cultural differences could be found even within these categories. For example, according to scholar and mythologist Kim Soonie of the Cultural Heritage Administration, snake worship – remnants of which remain today – was far more prevalent in the east than in other regions. Men in the west were reluctant to marry women from the east, as it was believed that the snake deity followed the women and the western villages didn’t welcome it.

Jeju is also an island of two distinct climates, that of north and south, as all locals know. Thus the industries, and the lifestyle surrounding them, were quite different from one side of the island to the other.

The community bond existing in each village was historically strong, based upon the need for collective labor and economy and representing an extension of family structure. Indeed, as inter-village marriage was not common, each village would have represented a fairly intact gene pool.

The 20th century irrevocably altered this bond through a series of events.

First, there was the 35-year occupation by the Japanese military from 1910 to 1945, during which native identity was discouraged. This was followed by some measure of American military occupation as Korea’s post-colonial governance was being formed.

During that period, according to author Han Rimhwa, the well-known national military crackdown on Jeju’s perceived communist sympathizers resulted in villagers turning against one another in a culture of fear and distrust, wounds that have yet to fully heal.

The Korean civil war of the mid-1950s, in which the US, USSR, and China also ultimately participated, presented a further challenge to Jeju villages and all of Korea in the form of general trauma and chaos. The nearly 60-year postwar period of unresolved conflict between north and south represents an ongoing stress factor, according to scholar Ko Heakyoung and many others.

President Park Chung Hee’s economic measure known as the New Villages Movement dramatically altered village life throughout Korea; his and two subsequent military regimes, each of which identified a goal of integrating the largely distinct culture of Jeju into Korean society, further broke down the village structures of the island, as reported by scholar and local historian Cho Young Bae.

Modernization of Jeju Island has resulted in a marked migration of the populace to its cities of Seogwipo and Jeju, largely the latter as 80 percent of the island’s population lives in its capital city. 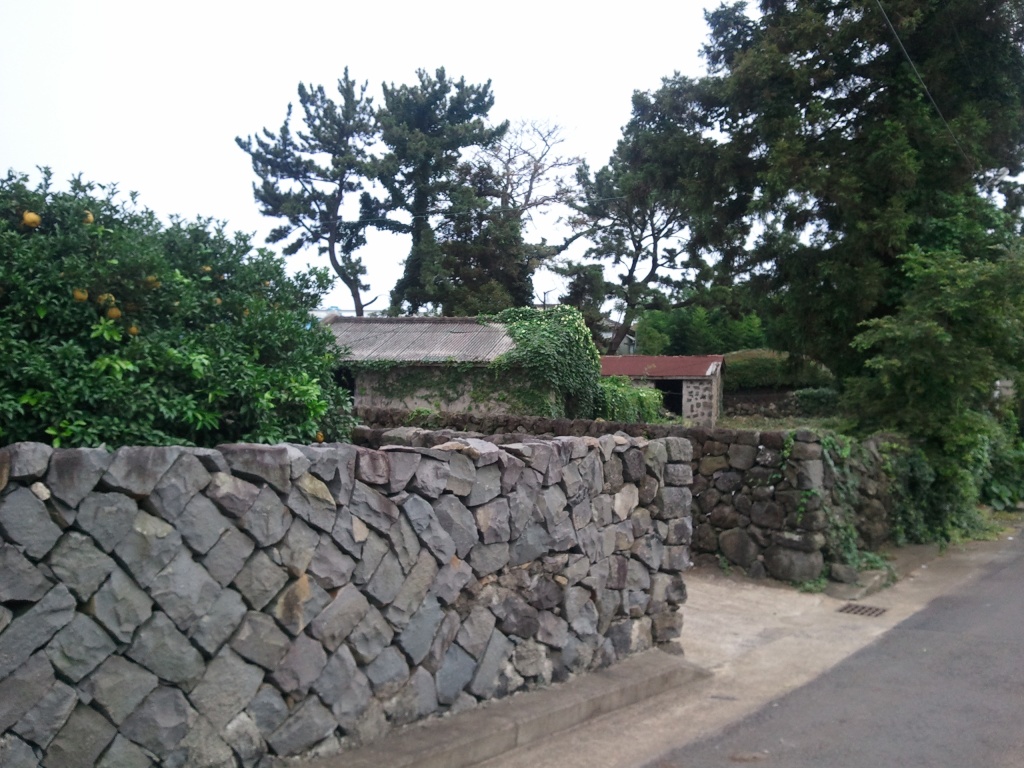 Because of industrialization as well as the emphasis on tourism, there is no longer any need for collective labor except among the diving women – an occupation that is in rapid decline.

Mass emigration of young adults to Seoul and elsewhere outside of the island has also been a common practice since the 1980s, according to Jeju Forum C representative Koh Hee Bum and Jeju Olle chairperson Suh Myung Sook, two early emigrants who have recently returned to Jeju.

While there are still more than 500 villages on Jeju, many have a population under 200, and houses stand empty. A majority of village residents today are elderly.

Jeju island has been known for the longevity of its residents since the year 1704 when the first centenarian records for the region were developed and maintained.

The province currently holds the record in Korea for longevity, as reported by The Korea Times and others. In the context of similar such “blue zones” around the world, this is presumed to be due to the nature of island life. With more than 65 residents who are presently over the age of 100, three live in Jeju City and the remainder in villages, according to Statistics Korea as reported by The Chosun Ilbo.

The central government has recently launched a “centenarian project” in preparation for Korea’s aging population, an initiative broadly covered by Korean media. This program, according to KBS and others, aims to support the “self-sufficiency and social participation of the elderly” – qualities that have always characterized the elders of Jeju Island.

Today, Jeju’s villages are mostly sleepy towns in which neighbors don’t always know one another, a common theme among multiple interviewees. Village residents have not adopted all elements of modern living, though traditions for the most part are no longer followed.

Caught between eras, they represent the very transition of Jeju society itself.